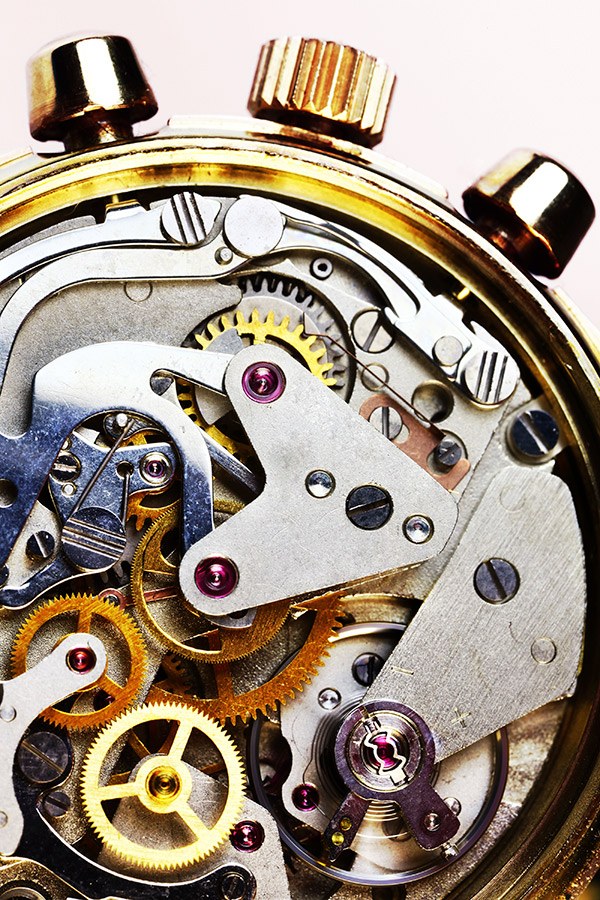 In the thiry-month period 2016 through June 2019, twenty-two business owners celebrated a successful exit as a result of engaging Marigold Resources.

Marigold customers' business transitions are personally guided by one or both Managing Partners. Our team is here for as much or as little as you require.  This includes coachng and brand optimizing a business to increase its value all the way to a successful exit.

These resources include the following:

Our most meaningful engagments are with business owners who have realistic and acheivable exit goals. When a business owner understands what needs fixing, and our expertise fills those needs, we all strike gold.

Your business exit strategy is one of the most important considerations in your life.

Getting out of your office and gathering a new perspective for one whole day is the most important next stpe to find your exit strategy.

Business owners seeking solutions for more exit options are encouraged to consider qualifying for a Day in Davenport, which includes confirming your Value Builder Score, an Estimate of Value Report and Scenario Planning at our riverfront offices in in Downtown Davenport. 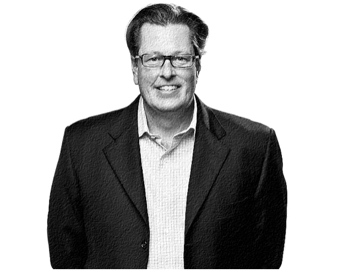 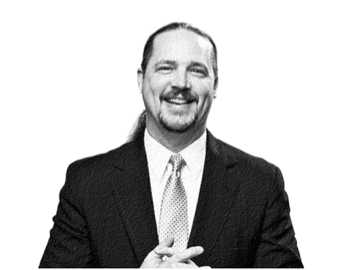 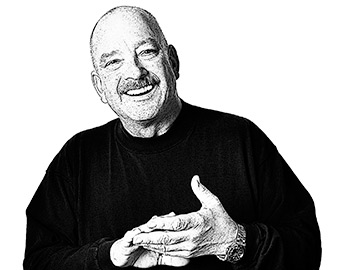 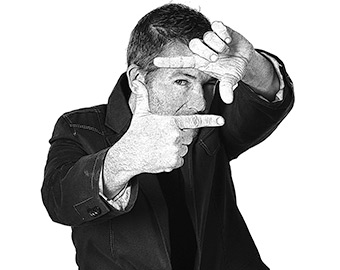 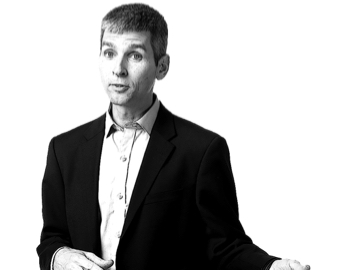 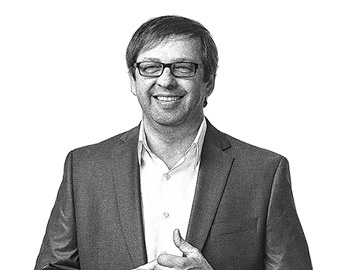 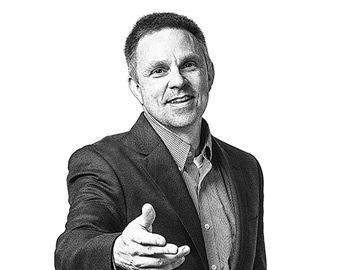 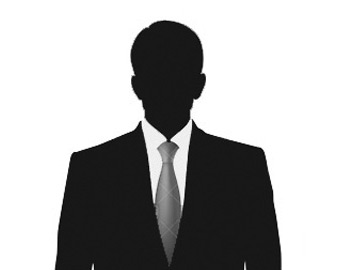 Since 2012, Marigold Resources has made its world headquarters at the 1140 sf finished office space inside an industrial warehouse alongside the Mississippi River in downtown Davenport. The building built in 1920 and added onto in 1971 at 308 E River Drive is the second closest structure to the river in downtown.
Marigold's office overlooks the Arsenal Island bridge, two train tracks, Lock and Dam 15 and the crossroads of the national Mississippi River Trail and American DiscoveryTrail. In the winter one can watch bald eagle's dive for fish 50 yards outside the window. It's centrally located, close to many amenities, and parking-wise situated so business owners can visit discreetly. 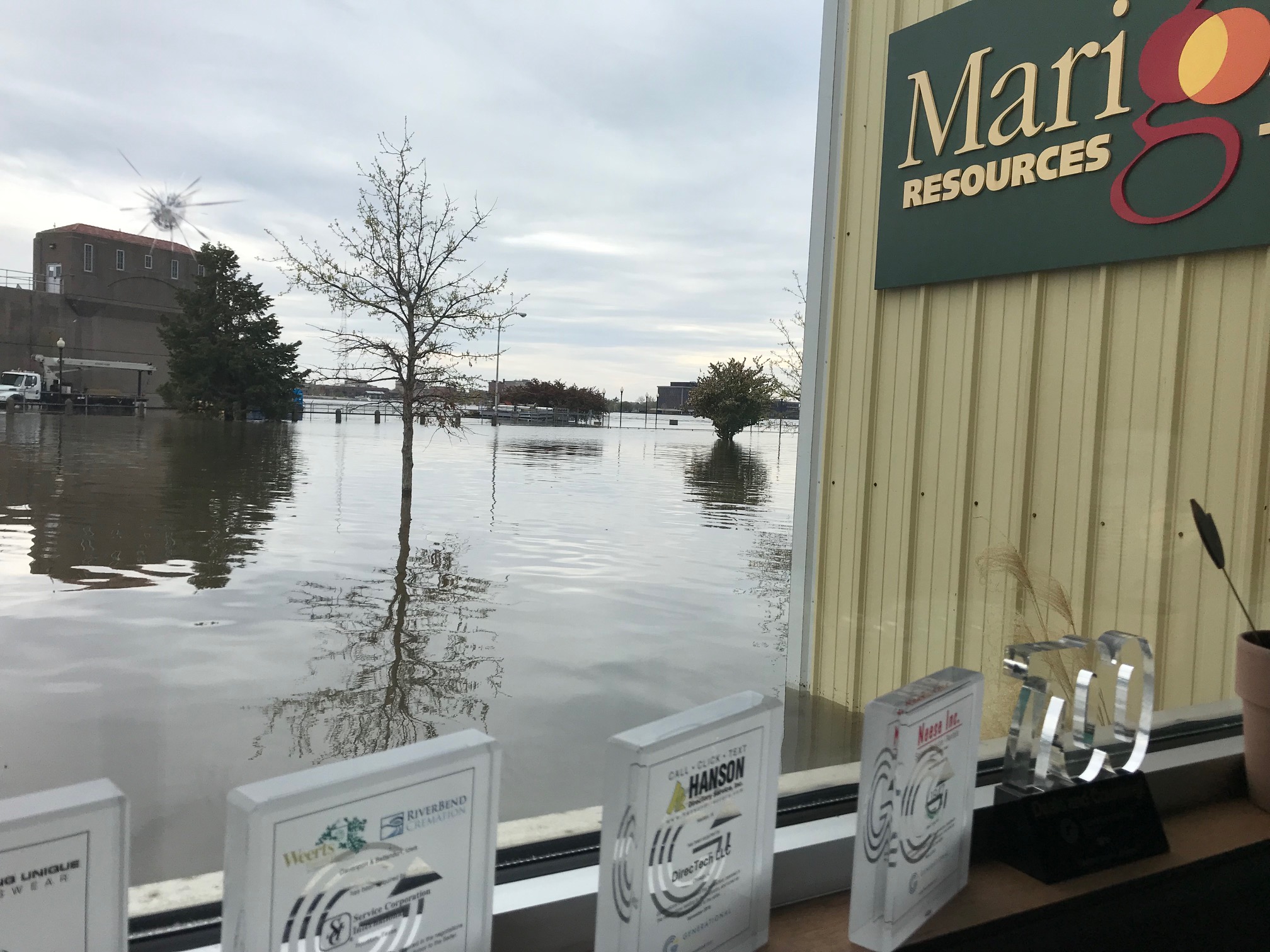 On April 30, 2019 the temporary levee or flood barrier made of HESCO boxes, erected by the City of Davenport right outside Marigold's doors on River Drive gave way. Video of the critical moment was captured by a neighbor's security camera and can be watched here, or below (the breach is at 3:33 mark).
Managing Partner Chris Barnard was in the office when the barrier broke and the river filled up River Drive and 2nd Street so quickly, Chris' car was nearly washed away (it remains flooded in the parking lot). He and his dog Mick had to be boated out by the Davenport Fire Department, which was captured live by TV crews. Chris has subsequently enjoyed some celebrity status – at least amongst his family and friends who saw him on the footage used on several national news shows. But, we all know that when there's a disaster, getting the shot of the dog being rescued is the money shot. 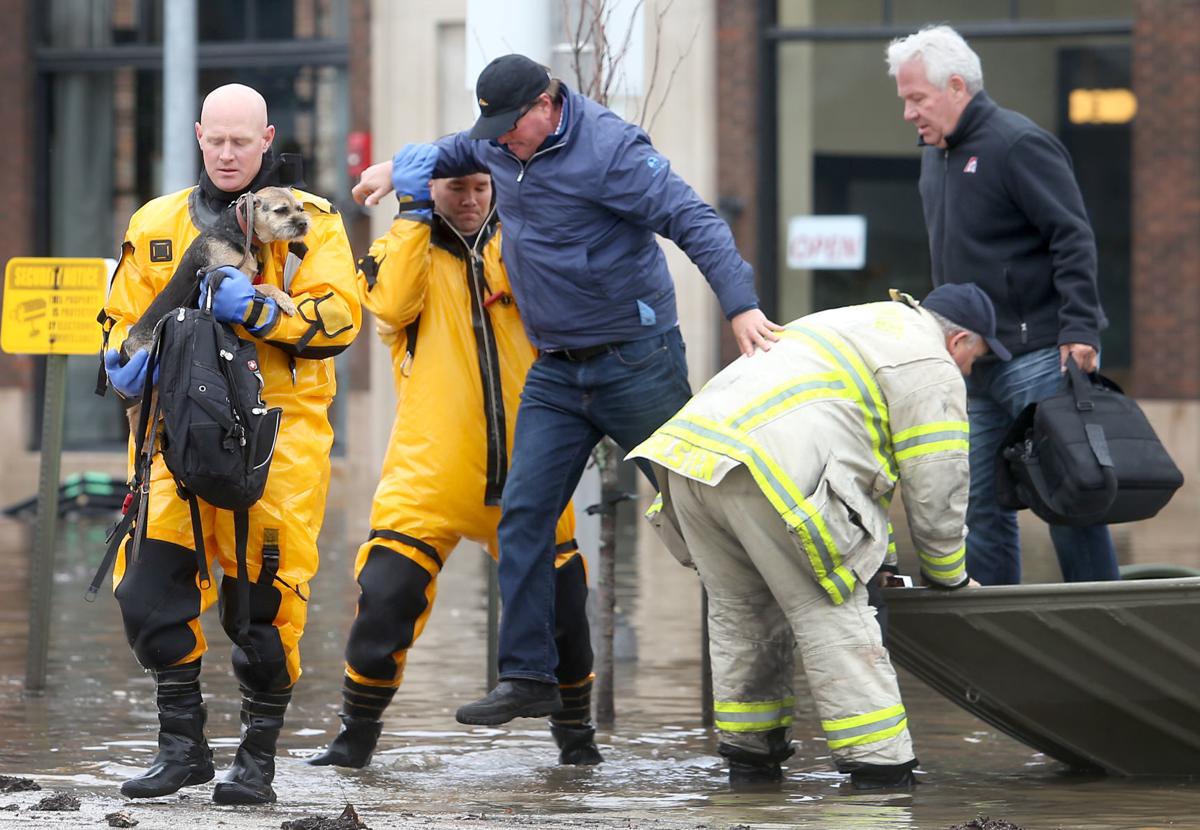 Managing Partner Todd McGreevy was returning back to Davenport from an out of state road trip when the levee broke. The next day Marigold's Branding Advisor Larry McDonald equipped Todd with a small kayak and gear to gain access.

The previous record for flooding was set in 1993 at 22.6 feet and in 2019, the river has beat that record by getting to 22.7 feet on May 3rd.  The good news is the building has no basement, and the office and warehouse level are at 22.8 feet high in river depth measurement.

Subsequently, at its crest, this flood came within 1” of breaching the Marigold office spaces. The office still has power and until last Friday, had internet and phones. McGreevy even took a couple calls while policing up items in preparation for rising waters.

Marigold has been fortunate to have many friends and colleagues who have offered temporary office space during this disaster. The office number 563-424-5707 is working and advisors are checking voicemail from afar. While temp office details are being worked out, for the time being Barnard and McGreevy can also be reached by e-mail and cell phone.
Now that the river has crested and is receding, and additional measures have been taken to protect the office should the river rise to a new record again, Marigold's customers should experience very little disruption in the high touch service these M&A advisors provide. 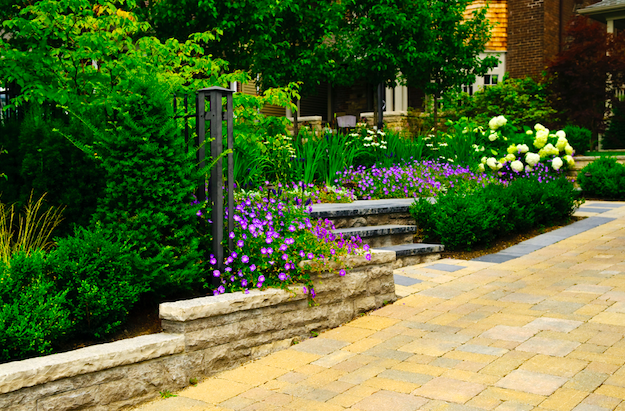 Extensive operations and project management systems in place afford this business the capabilities to pick and choose the most challenging and rewarding high-profile and profitable projects. 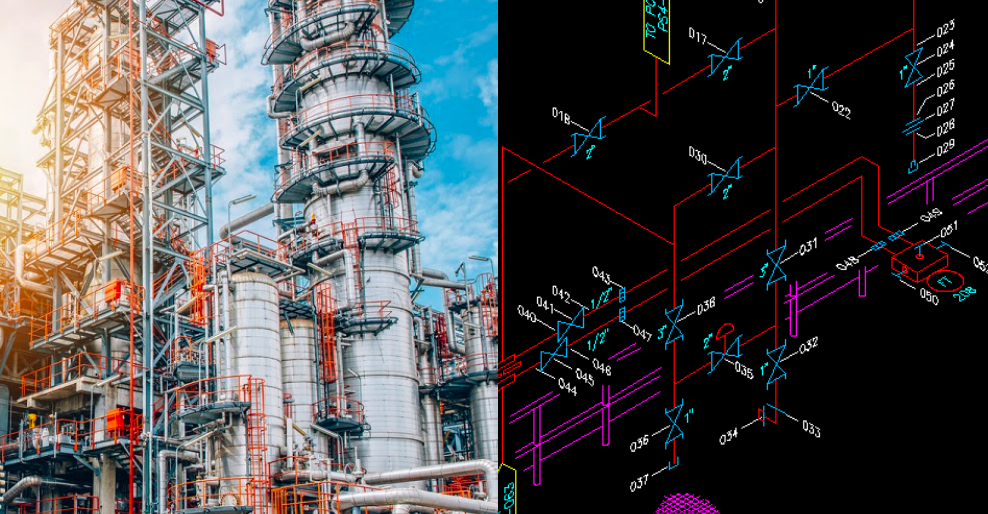 The Midwest based Company has succeeded, in part, by developing disruptive technology that saves speciality chemical and refining customers time and money.

The Company primarily serves the chemical/ specialty chemical market (63% in 2018) as well as refining (15%), commercial construction (11%), and industrial (11%) markets. 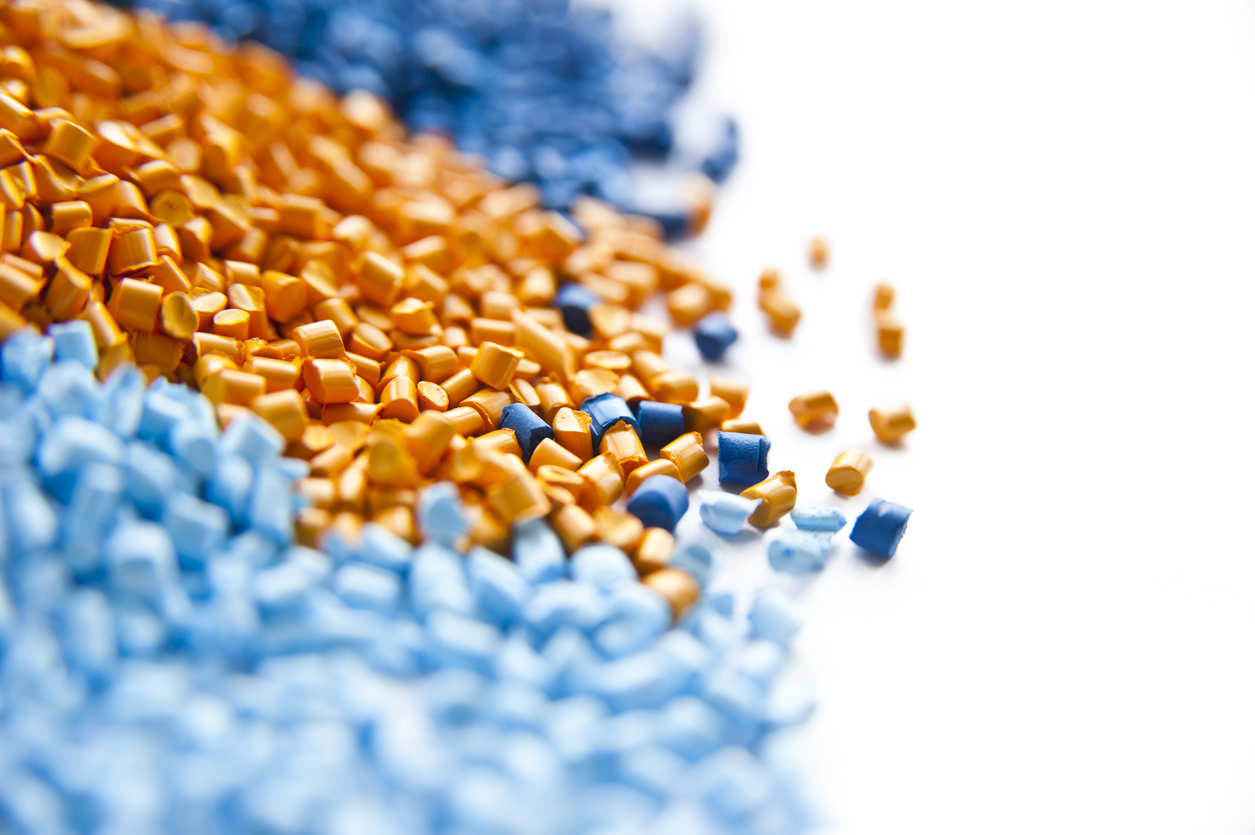 The Company specializes in plastics thermoforming and sheet extrusion. This business is ideal for an OEM that wants to re-shore their plastic component parts sourcing.

The Company works with customers for prototyping, design, fabrication and finishing of thermoformed and injection molded products. The Company also prototypes products for other forms of manufacturing and prides itself on servicing both large and small customers within consumer and industrial markets. 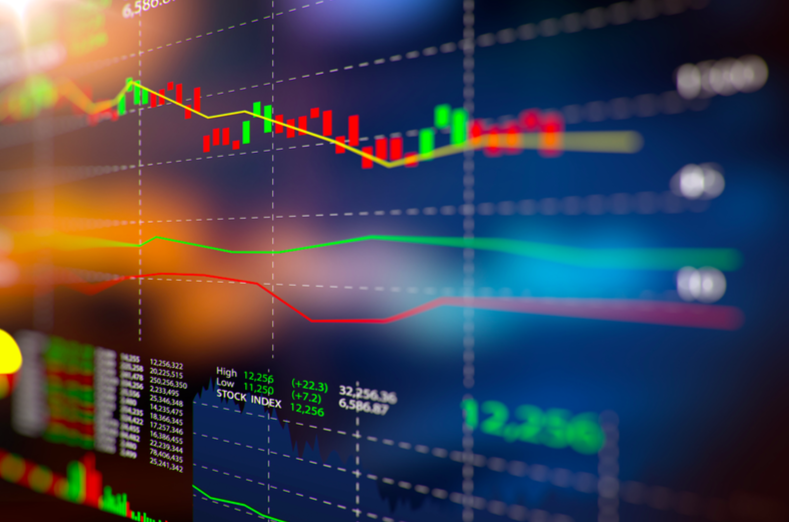 The Company is a privately-owned supplier of operations software to the alternative investment industry. The Company's primary product is a proprietary enterprise system used by advisors around the world. The software allows advisors to manage both commodity pools as well as separately managed accounts.

Customers are primarily commodity trading advisors (CTAs) and hedge funds with assets under management ranging from $10M to $3B. All customers trade futures, and most trade LME (London Metals Exchange) and FX (Foreign Exchange). A small number trade equities and/or ETFs (Exchange-Traded Funds). In addition, the Company maintains a secondary channel of service providers that offer hosted accounting services to CTAs.